The new £20 note is almost upon us with a fresh and modern look. The new note releases early next year, giving a new face to our money in the 2020s.

When is the new Polymer £20 pound note released?

What are the security features of the new £20 pound note?

The new polymer 20 pound note contains a number of intricate security features that help to protect against fraud. The polymer note features foil patches with 3D images, holographic text that changes from one word to another and a hidden number that only appears under ultra-violet light.

Another way check that the new 20 pound note is genuine is through the raised dots. Similarly to previous notes, the new £20 polymer has raised dots that appear close to the price of the note. In addition to adding an extra level of security to the note, they allow the blind and partially sighted to easily identify different bank notes by mimicking braille.

There are several transparent windows that appear on the note and help to identify the authenticity of the note.

The note features a large transparent window with a blue and yellow foil image. On the reverse side of the note, the foil image is silver. In the corner of the note is a second smaller window, with a raised surface. The raised surface shows a repeating pattern of the number 20, which can be seen and felt. 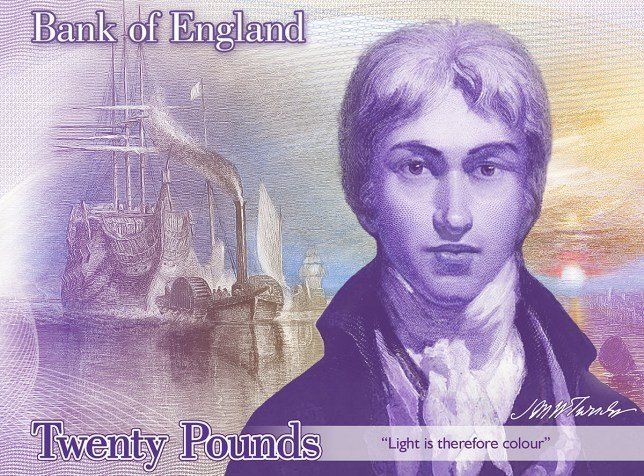 Turner began his career at a time when landscape painting focused on accurately recreating reality. He grew to fame as he instead used colours and scenes as a form of express. This made him a key figure of the romanticism art movement and marked him as one of the most influential and important British painters in history.

The quotation “Light is therefore colour”, found on the bank note bellow Turner’s portrait, is taken from an 1818 lecture. The quote is refers to the unique colour and tone that came from his approach to painting.

What paintings are used on the new note?

Two paintings are featured on the Turner side of the new 20 pound note. The background comes from ‘The Fighting Temeraire, tugged to her last berth to be broken up‘ – 1838. The Temeraire was a highly regarded ship that was known for its service in the Napoleonic Wars. The painting depicts its final moments as it is dragged away by a tug boat to be broken into scrap.

The image of Turner himself is adapted from a self-portrait he had painted in 1799 at the age of 24. Turner painted this portrait as he became an elected Associate of the Royal Academy, marking an important moment in his life.

Just as William Turner’s portrait marked an important moment in his life, it will mark a new decade for ours. With the note coming early in 2020, it gives a picture-perfect look to the money of the new 2020s. The new security of polymer bank notes bring us into the future, while their historical figures help us remember the past.