Pool tables are everywhere, we’ve all enjoyed a good game of pool and we all know that pool tables are green. But why are they green? Is there a symbolic reason for the green cloth of pool tables? Why is pool cue chalk blue? Lets start with the green color used for pool tables, and then take a look at other pool table colours.

WHY ARE POOL TABLES GREEN?

The answer to why pool tables are green lies in their history. You may have looked at the green table during a pool game and thought “that it looks an awful lot like a field sports game”, and you’d be absolutely right! Pool, snooker and billiards, or ‘cue games’ can trace their origin to lawn games from over 600 years ago. The first lawn game that could be distinctly recognised as billiards was played in the 1340s. This game was brought indoors sometime during the 1400s by King Louis XI of France, who had the first known indoor billiards table. 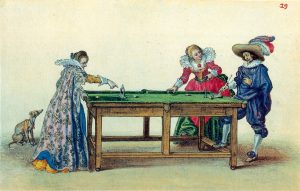 During 1600s, the popularity table billiards had spread across England and France, with the original outdoors version dying out almost entirely. When the decision was made to bring the game indoors and onto the table, so was the decision to use green cloth. This allowed the table surface of the indoor game to resemble the grass that the original game had been played on.

Today the custom of using green grass-coloured cloth for tables has persisted, with green having the become the traditional color for all cue games. Even to new players, the resemblance of the green table surface to a grass playing field is immediately clear.

WHAT ABOUT BLUE POOL TABLES?

When the U.S. Open Pocket Billiards Championship first aired on television in the 1970s, the green color of the tables made following the balls harder to see on television screens. For this reason, the cloth color for tables in televised pool championships was switched to blue, allowing viewers to follow games with greater ease and avoid the eye strain that the bright green color caused. Blue pool tables are still used in US Open Pool Championships to this day, despite the colour reproduction of modern televisions no longer having the problems that first caused the switch to blue table fabric. Due to it’s association with tournaments, blue pool tables have become popular throughout the United States even for privately owned pool tables.

WHY IS POOL CHALK BLUE?

The origin of blue cue calk is often attributed to a named named Jack Carr, a billiards marker (scorer/referee) from Bath, who made a fortune with his ingenious swindle. Carr’s cue chalk story begins during the time that cues were transitioning from the simple wooden sticks of the past to the modern leather-tipped cues we know today. To improve the poor performance of simple wooden-tipped cues, players experimented with filling the tips to soften the wood. Others players, while idly twisting the tips their cues into the plaster walls and ceilings of billiard halls, discovered that the fine limestone powder would improved the cue’s performance. In the early 1800s, a  French army captain named François Mingaud created the leather tipped cues that are the basis of cues used today. These cues greatly improved their accuracy in hitting balls, but even these newer cues did not deliver a perfect hit. 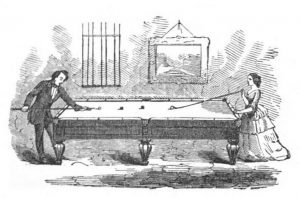 Jack Carr, remembering earlier techniques with powder from plaster walls, realised that he could further improve Mingaud’s cues by chalking them. Some time during the late 1820s, Carr was selling small containers of blue-dyed chalk and marketing it as his ‘magic twisting chalk’. The added traction from combining leather tips with chalk allowed players to create new techniques, like sending balls down a curved path by hitting the side of the ball to add a spin. News of his ‘magic chalk’ spread like fire, and he made a fortune by selling it for a half crown, about the average weekly wage of that time.
Carr’s business eventually fell through, as customers realised that the ‘magic twisting chalk’ was simply white chalk that had been coloured blue, and that any regular white chalk was just as effective (and far cheaper!). While players were no longer willing to pay such steep prices for a box of ordinary chalk, the blue colour became a custom and persisted even after the Carr’s chalk con had ended.

This is how the popular tale goes, but sources are sketchy. The fist known accounts of Carr’s magic chalk come from the 1858, but no mention of the colour is made. Similarly, there are written accounts indicating that blue chalk first appeared in 1828, but no reason for its emergence is given. Regardless of the color of the ‘magic chalk’, standard white chalk was still commonly used throughout the 1800s.

A more verifiable origin of blue chalk, as a standard color, begins with an 1884 patent from Anthony Peple, a billiard player from Brooklyn. Peple’s patent described a cube of chalk that was colored green to reduce discoloration on green tables and covered with paper to protect against contamination from the oil on skin. The coloured chalk was awarded a patent and began sale by Brunswick-Balke-Collender Co. in 1885. In the 1890s, a chalk substitute began sale in Paris that used blue colouration due to the American patent. This chalk substitute contained silica, which gave is greater binding qualities in comparison to chalk, quickly gaining it a reputation for it’s superior quality to green chalk.

Silica chalk substitutes were eventually sold in both green and blue, free from Peple’s patent due to it’s differing composition. Despite the chalk substitute’s new availability in green, the color blue still proved to be more popular with players due to it’s reputation as a higher quality chalk. Over 100 years later, blue chalk is still the popular choice with players of pool and snooker.

ARE THERE OTHER POOL TABLE COLOURS AND CHALK COLOURS?

Now that you know that green cloth is used for it’s likeness to grass, and chalk is coloured to reduce discoloration of tables, you may be wondering if there are other pool table colours available. Traditions can be fun, but do you really need a green table? Oh course not! Not only are uniquely coloured pool tables growing popularity, they’re actively encouraged by Hainsworth, the UK’s industry leader of cue sports table cloth. Hainsworth, which has been active since 1783, offers pool cloth on every colour you can imagine playing pool on, and then some. They even retroactively made blue chalk correctly match table cloth colour, with the of release their ‘powder blue’ table cloth.

When it comes to the pool table colors available today, ‘all the colors of the rainbow’ doesn’t do justice to Hainsworth. There is just red, there’s bright red, windsor red, burgundy red, maroon red and more.

Red is just the beginning, there are snooker and pool cloth colors to match any them of room you need to fill, whether you’re setting up your pool haven at home or renovating a pool and snooker club, there’s no better selection or quality than Hainsworth snooker and pool cloth. For a closer look at the available for pool table colours, take a look at our Hainsworth cloths section.